About
Join
Insights
Resources How to Give

The COVID-19 pandemic is an unprecedented crisis which has caused significant economic effects that are being felt in the nonprofit world. An overwhelming majority of nonprofits expect a decrease in contributions over the next year. In a separate survey, half of nonprofits reported that they have the ability to cover less than one month of operational expenses with their cash reserves. At the same time, so many communities rely on these very organizations for services and support during difficult moments–and are looking to the social sector to help guide important, lasting change for key issues of poverty, inequality, racial injustice and more. 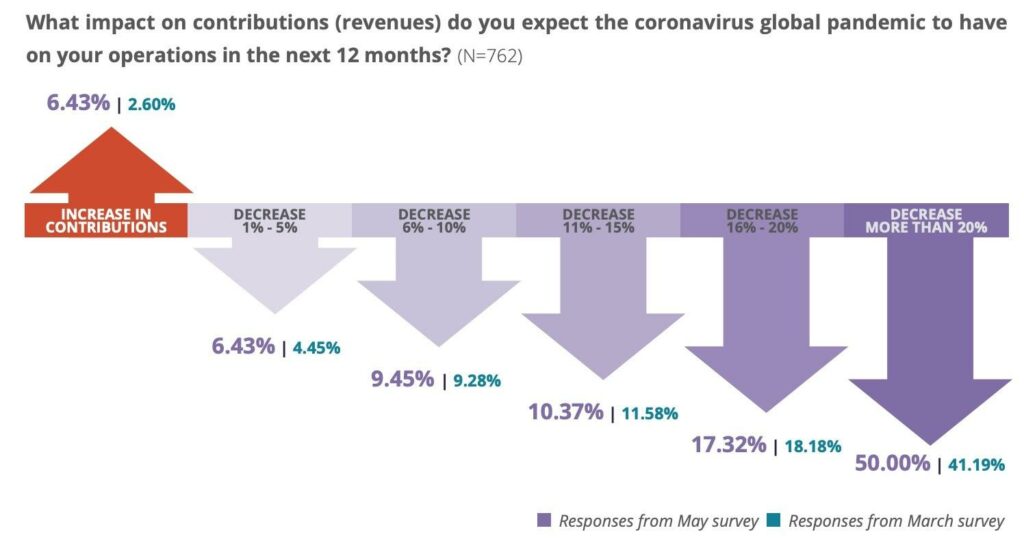 From Charities Aid Foundation ,”The Voice of Charities Facing COVID-19 Worldwide” May 2020

Nonprofit and community organizations will be a crucial part of coping with and recovering from these challenges, so it’s imperative that we find new ways and best practices to support sector resilience. With #GivingTuesdayNow, we aimed to help amplify the giving and unity in response to the crisis. Building on work prior to and as a result of #GivingTuesdayNow, the GivingTuesday Data Commons will continue to collaborate with giving platforms and other stakeholders around the world to deliver primary research on giving trends and generous behavior.

As time and resources become more scarce, we want to help the social and charitable sectors to focus on the opportunities to manage this crisis and prepare to emerge with a positive legacy.

To help guide your organization’s efforts, we’ve examined three key principles of fundraising and building support during a crisis:

These principles were drawn from other large scale crises such as 9/11 and natural disasters. However, it’s important to remember that the current pandemic is unique in scale and duration. While we can’t expect to see the same outcomes, we can look for signals in the current crisis that match trends from the past and which may indicate opportunities and risks. In the coming weeks, we’ll examine each of these more closely to provide additional data and actionable tips for strengthening your base of support. Here’s an overview:

The rise of Donor Advised Funds (DAFs) has been well documented. One positive aspect of DAFs is that their giving appears to be relatively resilient to recessions. Given the enormous increase in DAF assets since 2009 and the fact that DAF sponsors are actively engaging their fundholders to give during this crisis, these funds have the potential to substantially cushion the economic impact of a recession.

However, contributions into DAFs only made up about 10% of total giving in the United States in 2018. Foundations made up about 18% of the total. Giving from foundations actually increased during the recession following 9/11 and during the 2008-2009 Great Recession. Further, other forms of giving are important and can make a real difference for organizations. Fortunately, volunteerism rates tend to increase when the unemployment rate is high. People want to give, they just have to be engaged the right way. The lesson here is to diversify your funding sources and to diversify what you ask for, non-financial forms of giving can be valuable!

Big unexpected events shift people’s focus. People give time and money in the aftermath of disasters but typically only for a brief period. The duration of the current crisis is unique and it remains to be seen how donor behavior will play out over the long term. Nonetheless, it is important to find innovative ways to shape your messages to make your cause personally relevant to supporters. In past crises, a focus on individuals and local communities has proven especially effective.

There are other useful insights from previous crises that can help inform messaging during COVID-19 and the resulting economic downturn. Researchers asked survey respondents why they gave after natural disasters that occurred in 2017 and 2018. The top reason which motivated donors to give was the scale of the disaster. The third most common reason was the amount of media coverage of each disaster. The scale of the pandemic crisis is global and constant news coverage means that it is top of mind for everyone. Crisis oversaturation can lead to overstimulated empathy and the identifiable victim effect – where it can become difficult to personally relate to a large-scale disaster. There’s no doubt that people are giving in response to the crisis. However, highlighting the individuals and communities that your organization is serving–or connecting your cause to a personal connection, such as locale, affiliation, or identity as a past supporter–can inspire your donors to give more or engage with your organization in different ways.

During the Great Recession, the percentage of adults that made donations remained stable in the United Kingdom. The same phenomenon was observed in the United States. Researchers at the Stanford Center on Poverty and Inequality found that in 4 out of 7 recessions, donations continued to climb. 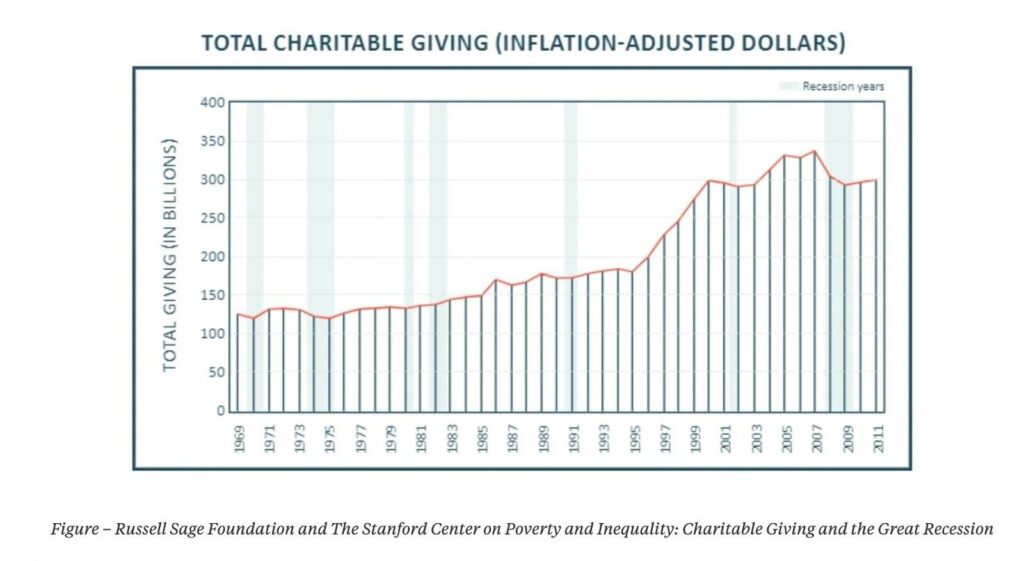 The declines in giving during the Great Recession were driven mostly by wealthy individuals. During the great recession, states that had large decreases in median income actually had large increases in the % of dollars donated per after-tax dollar. Taken together, these trends indicate that small dollar donors are reliable even during recessions and that they are activated to give after disasters. Evidence from GivingTuesday donors also teaches us that there is tremendous potential for return when engaging small dollar donors. Now may be the time to build a campaign specifically designed to engage these donors as well as new donors, especially if your message highlights how your organization is helping mitigate the impact of the COVID-19 crisis–either directly or by addressing a secondary impact that a supporter can personally identify as being important to them.

In the coming weeks, the GivingTuesday Data Commons will take a closer look at each of these principles of engaging supporters during times of crisis. By examining the economic data and fundraising research, we’ll offer additional guidance on how nonprofits can weather the COVID-19 storm and emerge with increased resilience.

After Year of Global Crisis, Millions Respond with Massive Swell of Generosity and Shared Humanity on GivingTuesday 2020

In a single day, GivingTuesday donors in the United States gave $2.47 billion, an amount that is more than all but one US philanthropic foundation gave in a full year…